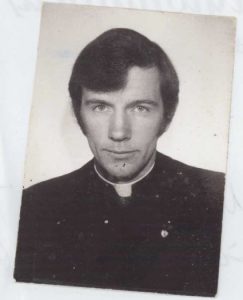 A path snaked down the cliff. The rocks beneath held out the prospect of good fishing. We were young and the old neighbour as he cautiously led the way regaled us once more with memories. Dark memories, perhaps which were troubling himself. One I didn’t like. He used point to a spot known as ” The Blue Pool”. A drowning took place there decades ago. Such was the gossip that the victim’s family wore an oversized jacket of suffering to the extent that none of its members ever married.
Now in one’s youth there is a sharpness in one’s senses. It is a dawn experience. As we descended the cliff, to our right, our hearing was touched by the sounds of a little waterfall that etched down the forehead of the cliff. We were permitted an indulgence. Inevitably, when at sea level we clambered to the damp basin. We drank and often playfully splashed each others’ faces, hardly conscious of our agility on the slippery rocks.
“That water comes down from Gleann Argid, which means the Glen of Silver”, our guide explained. ” It is a spring well which emerges less than half a mile from the cliff top in a little valley known as a Clash , and it never runs dry”. And, as if to further its credentials he added, ” Back in the Thirties we had a very dry autumn and the neighbours came in droves with clattering utensils and argumentative ways to this glen to take home water to man and beast”.
Today that silver stream and its spring well runs gracefully as ever and is almost locally forgotten, as it lies a mile eastwards of Meenogohane Pier on the coastline of North
Kerry.
Now when fishing, my child’s eye was always drawn to a narrow ledge high up on the cliff
face. ” If I had wings … “, I told myself. Why this interest in this place with its shaggy
appearance ? Simple. The old man had a tale to tell.
Once a body was washed in. Enquiries along both sides of the Shannon Estuary brought no
clues and it was presumed that the drowned
man came from a foreign ship. So within yards of where the corpse was found, somehow
mysteriously, he was laid to rest on the ledge which was the object of my attention.
Unnamed , without grave marker and forgotten such reality to a young mind is an introduction to melancholy. Ever since the calling of sea
birds hold a tragic note for me. They anchor
me to this unnoticed place of burial. Did not
the poet write, ” Full many a flower is born to blush unseen”.
On a later date, on a walk eastwards along
the same cliff top we came to the entrance of Kilmore Strand which franks the mouth of the Cashen river. There nestling by the sea boulders and bl est by the sea spray lies a “ceallunach”, a little postage stamp of a graveyard where the
remains of unbaptised children lie.
Ache and protest in the heart gave way in
later years when study taught me the logic
behind some burial practices. The adult stranger and the unbaptised child had no claims of
belonging on the community, And so, merited a separate place of rest beyond the sanctuary of the parish graveyard.
Nowadays the path to the rocks has crumbled. Seagulls nest on the ledge. I have read of a tribe in the Far East which takes its dead to cliff ledges and to return later to gather the bones. The gathering of bones, I stubbornly leave to others….

In the 1970s we stayed as a family with my grandparents in Dooks in the Kingdom of Kerry looking out over the majestic MacGillycuddy Reeks. At the time aged 13, fishing was my passion as it is today, and Dooks was a great place to pursue it. Friends from the UK used to visit us

I was sitting on the bench by the front window of Murphy’s Bar on Brandon pier. Derry was standing in front of me almost done with his pint. He turned, stared at me with a little smile. “You still want to go out?” I tried to be as casual as I could, “Sure.” “Meet me

This story is set in the picturesque Muckross National Park in Killarney, Co. Kerry. Every summer as far back as I can remember, we as a family would annually travel down to Kerry and stay in an old farmhouse in Brewsterfield on the outskirts of Killarney for a consecutive month, we were graced by having

The day is mild. May is here. No rain for days. The river water unhurriedly running towards the sea. Gently flowing over rocks, then plunging downward. Idling in the pool below. Picking up speed momentarily when gushing over the weir not made by man but nature. Pleasant, busy gurgling. Steadily. Perpetually. I listen to it