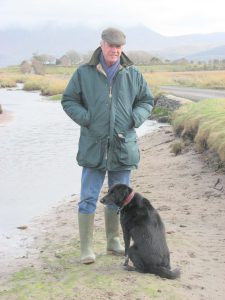 I was sitting on the bench by the front window of Murphy’s Bar on Brandon pier. Derry was standing in front of me almost done with his pint. He turned, stared at me with a little smile. “You still want to go out?” I tried to be as casual as I could, “Sure.” “Meet me at my place tomorrow morning. Make it about seven.” And out the door he went. I finished my Guinness. The day had finally come after all the pestering I had been doing to Derry since moving here nearly sixteen years ago. I was going fishing. In the Atlantic I was sure it would be.

The first time I caught a fish was when I was about five in 1946. Every Friday my mother took me on the cable car that ended its line west of Fishermen’s Wharf on San Francisco Bay to buy fish, mostly crab. I always got to sit on the outside bench as long as I held on to the brass pole while my mother held on to the backside of my britches, just to make sure. One day after I got home from school my mother said, ” I’ve got a surprise for you, Johnny. Get your play clothes on.” Out of our front closet she pulled out a fishing pole and reel not much taller than me. In her other hand was a small tin box with a handle. I opened it and inside was some fishing stuff, tiny weights, a bob, little rubber critters and some hooks. A fishing line was threaded through the eyes of the rod with a weight and hook at the end. “We’re going fishing and I am going to teach you how” she announced; and on that cable car we went. She said it was the same shoreline that her father had gotten off a schooner in 1888 at the age of twenty having sailed from Cobh to New York and then taking another ship around Cape Horn. “He loved the sea”, she added. I don’t know what kind of fish we caught. Couldn’t have been very big but I begged to bring it home and in a bucket of water it went until the smell got too bad.

In the morning I felt like the little boy I had been so long ago and got dressed: long johns (tops and bottoms), the heaviest wool socks I had that went nearly to my knees, Levi’s, a sturdy pair of boots, a thick Pendleton shirt and an Irish knit sweater over it and a long, padded rain proof jacket. I’d leave my flat cap home. It’d get blown off for sure. Instead I grabbed a knit hat, stuffed a pair of gloves in the pocket and headed out the door with my wife running after me, “Don’t forget the sandwiches”. At Fenit harbour I looked down at the boat saying to myself, “Heck, that thing can’t be more than 20 feet long, if that”. As I climbed down the ladder a fellow on board said “What you got in that bag?” “Oh, just some sandwiches and a thermos of coffee”, I answered. “Coffee, that’s it? That’s all?” I was too embarrassed to say more. Derry, a man made for the Atlantic, took the helm; but instead of turning right with my hope of landing a wild salmon, we turned left toward Tralee. It would be oysters we’d be fishing for, or more precisely dragging for. But I was in a fishing boat with an Irish friend, so oysters it would be. Maybe next time.

In the 1970s we stayed as a family with my grandparents in Dooks in the Kingdom of Kerry looking out over the majestic MacGillycuddy Reeks. At the time aged 13, fishing was my passion as it is today, and Dooks was a great place to pursue it. Friends from the UK used to visit us

This story is set in the picturesque Muckross National Park in Killarney, Co. Kerry. Every summer as far back as I can remember, we as a family would annually travel down to Kerry and stay in an old farmhouse in Brewsterfield on the outskirts of Killarney for a consecutive month, we were graced by having

The day is mild. May is here. No rain for days. The river water unhurriedly running towards the sea. Gently flowing over rocks, then plunging downward. Idling in the pool below. Picking up speed momentarily when gushing over the weir not made by man but nature. Pleasant, busy gurgling. Steadily. Perpetually. I listen to it

I first heard of Coomloughra when I set out to climb the “Coomloughra Horseshoe.” It’s one of the classic hiking and scrambling ridge routes in Ireland and takes in several mountain tops – Scregmore, Beenkeeragh, Carrantoohill and Caher. These have an average height of about 1,000 metres. Nestled several hundred meters below ,there are three