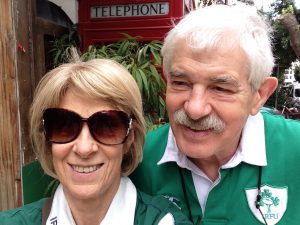 The summer of 1976 may have gone down as one of the driest on record with lakes at an all time low and rivers reduced to a mere trickle, with “my own” river, the Owenea, lower than I had ever seen it. Finns pool, at the bottom of beat was just a collection of large stones and boulders joined with stagnant pools and the merest hint of a stream at the neck of the pool.
I arrived at the river at 6:00am on a Saturday in July to study the pool from the road bridge, conscious of the high tide is hour before which would now be on the ebb and hopefully would have encouraged fresh fish to “take” the river
I watched spellbound, as a shoal of salmon and sea trout circled in the pool below the bridge, as if waiting on a signal. One samon went upstream and returned after a reconnoiter to bring the shoal up into Finns pool, then! Well at least 50 samon and a dozen sea trout making waves throughout the pool as the tide receded. It wasn’t long before word got out and the population of Ardara arrived on the bridge, some taking photos and some fishing from the banks of Finns’ pool, trying to catch a salmon or see trout as the fish desperately tried to fight their way upriver to reach the deeper water in Dohertys pool.
Amongst the arrivals were three young lads on motorcycles who heeded upriver, carrying some baling twine and wooden stakes, I thought this rather strange but not so strange as the fact that they were wearing their helmets in the hot morning sun as they ran through the fields, I wondered, why the helmets? After a few minutes I had my answer as the popular local bailiff, Paddy Mooney, enived to join the party and headed upfield carrying his blackthorn stick!
It wasn’t long before the three motorcyclists arrived back downriver, two minus their helmets and hotly pursued by Paddy Mooney with blackthorn stick in one hand and dented helmet in the other!

Many years ago a man named James Quinn (Jimmy your great grandfather) was rearing his family in the countryside and had the mains water supply flowing past his house, the only problem was the water was not filtered and had to be boiled for ten minutes before you could drink it. Jimmy together with his

When I was a young lad on the pier I knew what was my calling To get a berth onboard a boat And earn my living trawling Fishing was good, money too My goal now, was to have my own crew When weather was rough, Big Jack & Charlie Would school us when at home

A year into our marriage we moved to a very old, dilapidated house out in the countryside because my husband wanted the fields that went with it. Wet August and I was in despair. I could see no redeeming features anywhere. On the first good day I wrapped up my two months old baby and

This small quiet village so peaceful and serene Ebbs a seafaring history on each tide that has been To recall rugged faces, their names bring a smile The stories they told made you linger a while Cannings Mc Cormicks Cavanaghs too Kelly’s and Farrens to name but a few A hard life was fishing in