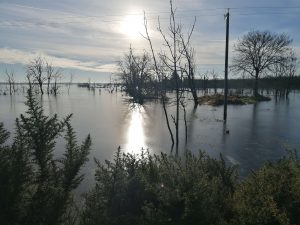 ‘The Lough has a mind of its own’, so the natives declare.
Lough Funshinagh – the lake of the ash tree, there is none like it in Ireland, or Europe indeed.
It overflows, then disappears almost fully, then overflows again. A type of turlough they say, we
have many a version in our county of the sheep stealers, but none like this. Connected underground
to the Shannon, the geologists presume. The truth for me swims with the eel as she got here from
the Sargasso and not by foot.
I show my children the lorg that indents our land, that once connected our mystic lake with Lough
Croan, that the old cow with her twelve calves travelled through every seven years, routed out by a
black pig, some pig, some routin, some cow. The swans, ducks and geese use the same flight path
today. The lorg was a roadway when trees covered the land. They traversed from lake to lake to river
where people lived, beside the food source.
Two chieftains went to war in the Battle of Rahara 1200 years ago along these shores that is now
overlooked from on high by our treasured football club.
Hillocks of rock, once called homes before the Famine, dot the nearby fields. The great hunger killed
more per head in our proud county than any other. Our fields are named after them in honour of
their being, as told from farmer father to famer son in our family, lest we forget. The mass rock at
Ballynasaggart on the northern shore reminds us of the penal laws and the brave souls who defied
the redcoats.
Tougher times than now. My ancestors, the same name as me, built the stone walls, dug the drains
to the Lough, sowed the crops, drew the water, reared the animals, with no tools or ways like today.
Respect to you all. They lost children – it must have been hard……….
And when the Lough starts dying, down through swallow holes, the pike, perch and eel all clamber
for water, but are easy pickings for the herons and the lads with manure bags and grapes. It takes a
while to recover, but the fish come back years later and thrive once again to the delight of the rusty
fisherman who once again takes out his cobwebbed rod.
The otter doesn’t like to see the Lough go out. The diet of mainly frog can get a bit tedious, but he
always seems to be in a good mood. It’s noisy down there. The Lough is honking at winter with the
northern birds who only ever see Inuit or Irish people. It’s unique in its breeding bird populations
and important for wintering wild-fowl according to studies but to me it’s just all-in beautiful.
Highest in April and lowest in October, the plumb-lines keep moving. But four years ago, it went way
too high. The locals knew this wasn’t just rain. The outlets are blocked. It has reached record levels.
The O’Kelly castle in Ballagh from the 16th century would have been in 10 foot of water today. So this
hasn’t happened in centuries at least. A home with two sides covered in 8,000 sandbags and pumps
watched for 6 months 24/7 held out through a family’s inner strength and community effort.
What’s the cause, climate change? August was the wettest month last year. We don’t know but
something is quare. Our disappearing lake of Rahara makes national headlines every few years. It
used to be because it went so low, now cos it’s too high. ‘The Lough has a mind of its own’.

What a bubble! One full of water. The mystique of water always pervaded my being, after all didn’t I come into this world with the breaking of water. With such an entry I was wet behind the ears. From early childhood water held my imagination. Growing up, the fairy fort in our land was always

When I was growing up on our County Roscommon farm, a half-mile stretch of river formed the mearing between our land and the adjacent townland. We called it, simply, The River, and the section from The Bridge to The Bottoms was a regular haunt for us. The river bed was deep and for most of

Fráoch Mac Idath, of the Connachta was the handsomest warrior in Ériu 1 (Ireland) and Albu (Scotland), ach níba shuthain – but he did not live long. The whole land was full of his story and renown, so much so that Findabair, the daughter of Queen Medb (Maeve) fell in love with him simply from

I grew up in the heart of the country within a whisper of the longest river in Ireland. The Shannon known as the “wise river” meandered through eleven counites almost separating the East and the West. Electricity had been connected to our house in the very early nineteen sixties but the running water inside and