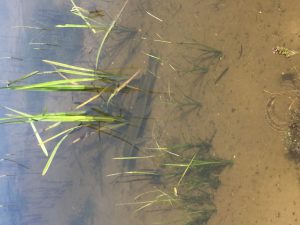 As I write, it is the 22nd April. The sun is shining, the bees are buzzing, the birds are singing,
and the temperature is 19°C. Social isolation is beginning to bite hard. Many of my angling
friends are suffering from cabin fever. We must stay within a 2km radius of home. I live in
Cahir, Cathair Dún Iascaigh, the fort of the fishers. I am a lucky fisherman: 2kms north is the
railway viaduct, 2km south brings me almost to Liamy’s Lane, an angling hotspot.
I take my fly rod and walk the 250m to the river. The path between Cahir Castle and
The Swiss Cottage is covered in clover and a yellow blanket of dandelions. The Friesian
cattle are settling well after been let graze the lush meadows. I approach the pathway and
slow down as I see a family passing, social distancing! It is my niece with her husband and
toddler. The father pushes the pram while she stops for a brief chat. My mother (RIP) told me
that there was an outbreak of Paratyphoid fever in Clonmel during the fifties. She met a
woman pushing a pram down by The Quay, one of them were dead the following week!
Fifty yards from the river there is a stream which leads into a deep pond. I use my
polaroid glasses to see beneath the glare. There they are warming themselves in the Spring
sunshine. It’s spawning time so the water is a hive of activity. Pike (Esox Lucius) have come
in from the river to spawn on the weeds. Unlike salmon or trout who build redds on the river
bottom, pike lay strings of eggs which stick to whatever plant life is available. The male
Jacks weigh about 3lbs on average. The female hens are much larger and can weigh from 7
to 20lbs. The pike eat the dace in the pond and later mallard ducklings! Irish alligators.
Next stop is the River Suir, one of the longest rivers in Ireland. I have made nymphs,
flies which resemble the larvae of insects that live on the river bottom and cast them
upstream. I watch the line as the nymphs’ tumble along the gravel. Suddenly the line stops and
I lift the rod and strike. The trout realising that it is hooked darts, swims, and jumps. After a
few minutes it is netted and placed in the creel. A beautiful spotted brown trout (Salmo trutta).
Something breaks the surface of the water. It is an otter with something in its mouth. Maybe
it is a crayfish? I think the plague has disappeared as I haven’t seen a dead crayfish in 2 years.
Trekking downstream I spot a lone fisher, a Grey Heron: motionless, concentrating and
camouflaged. A female Peregrine zooms past, the fastest raptor on the planet. In the past she
nested at the entrance to The Swiss Cottage. High on the thermals three buzzards soar and
call. The Swallows: where are they? The always come around Patrick’s Day. Do they know
that there is a problem in Ireland?
Ardfinnan Bridge is beyond my limit. In 1847 famine victims took shelter in the dry
arches to be cured of Famine Fever-cholera. They had no Nightingales, Doctors, or cures,
only hope. Maybe a ship in New Ross would take them to a better world?
“We are tied to the ocean. And when we go back to the sea…whether it is to sail or watch
it…we are going back from where we came” John F. Kennedy.

A man once told me he saw a space craft hovering over Marlfield Lake outside Clonmel. This is a true story as told to me and I believe he believes it. I wasn’t there. It was a nice fresh morning in the late 1990’s, the sort day where you know will it be warm when

A young boy, to the ducks, threw some bread. “Not so close!” his parents berated. But too hard did he throw, Went head over toe, And sulked his way home, saturated.

Water is a liquid formed when two gases come together to form H O. The whole world would starve as nothing would grow without it. Everything would be barren like the Sahara Desert. Let us think of where water has done a lot of good and made the world a very beauitful place. My mind

Oh how the memories come lfooding back of my childhood, the wonderful itmes we had in Graces bog, 6 acres of magic at the back of my own home. Every season had something different to offer in this oasis of beauty. Oh how I remember the morning mist as it rose over this wonderful place