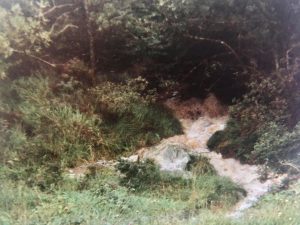 A white enamel mug with a blue rim sat on a little stone with a tuft of grass shading it. Always
turned upside down, ensuring that no insect would invade it, when not in use. This mug had a small
chip on the bottom of it exposing a dark rust colour. This colour was similar to the gushing stream
which ran nearby after heavy rains. However, while the stream was important on our farm in South
Galway, it was the spring well beside the stream that was essential. This was the well, where as a
child, I would go with one of my parents to fetch water. In this 1980s period, my parents decreed
that the water in our house was not of the same high drinking standard as that of the well.
Crouching down, scooping the water with the mug to fill the bucket, one had the chance to see their
reflection in the well, before taking the bucket of crystal clear water to our house.
Years later, my waterside memories of the well and the streams on the farm are vivid. Damp. The
smell at the well was always damp, even in summertime. Ferns, moss, sally trees, buttercups, bees,
butterflies, foxgloves, fraughan berries, honey suckle, speedwell, clover, wood sorrel, ivy, nettles,
and blackthorns. The rich kaleidoscope of nature was always there. It was a place for exploring and
learning vocabulary. Not only identifying the biodiverse wildlife that existed by the well and stream,
but further playing with words. Were the sallies superfluous and were the speedwells sparse? Were
ferns fatalistic or were the foxgloves fervid? Did the buzzing bees behave? Was the clumpy clover
crapulent in the wind? Rhythmic rhymes at the well too. The belle could yell and sell before she fell
into the well which would quell her spell.
The work associated with fetching water had been an activity that had gone on for generations. I
pictured gnarled knuckles turn white as they tightly grasp the handle of the bucket, and their owner,
my grandmother, who I never knew, would have crossed the fields to a thatched cottage with a
bucket of water. The well and the stream were part of the self-sufficiency on the farm.
Another memory that sticks with me is of the cattle drinking in the stream. That bovine smell as the
cattle snorted and burped while they sipped the water, with it dripping like a beard from their
mouths. Cattle with big eyes, that followed me as I played on the other side of the stream. In winter,
I remember the frozen stream and having to break ice so that the cattle could drink. I also remember
the calves creating a dance as they slipped and slid on the ice. Years later, dancing on ice has
become a phenomenon. Those calves were the early trendsetters!
While simple and natural in its role on a farm in South Galway, this aqueous place taught me lessons
early in life. Those simple lessons have remained with me. The importance of the availability of
clean water is one of the vital necessities of life and cannot be underestimated. The
interconnectedness of shared activities that occurred over many generations, flow through families.
Meandering in memory, these collective activities and stories form part of family history.
Opportunities for learning in the natural environment are fulfilling and memorable, making it fun.
The epic equanimity that one finds by water is difficult to replicate anywhere else. Much water has
flowed in the river, and trickled out of the well, but that simple 1980s childhood continues to
resonate with me.

On the 22nd July 1996 John and I set sail in our 21 foot drop keel yacht for Inis Oir from the Galway Boat Club in lovely sunny weather with a gentle northerly breeze. On our left, and to the south, were the slate grey hills of the Burren that they ran all the way

A grey sky lay over the Twelve Bens mountains, and Roundstone was drowning in the humidity of an August afternoon. It hadn’t rained in Connemara for five long weeks, but the ferocious sky above Roundstone Bay forewarned the village of the monumental downpour to come. Jimmy remembered his grandad out on Inishnee, across the bay

It’s amazing how you can spend your whole life passing through a space, and still know so little of it. Caught up in the clamour of everyday life, you often overlook the backstreets and the laneways. The nooks and crannies off the beaten path from which we seldom stray. The lockdown changed that for lots

Sitting here in a shady spot, the sun is sparkling over the water. The Cathedral is in full view as is the weir with that wonderful curving sweep. The Salmon Weir bridge downstream has locals and tourists hanging over it, looking for elusive salmon on their way upstream. To my right, the water is quiet