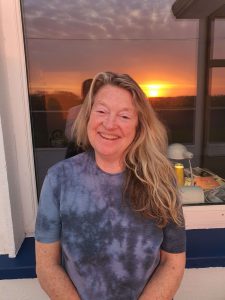 Maria stood outside the Harbour House. Her childhood home! When her father (a Clare
man) got transferred from Leitrim to Sligo with the Department of Agriculture in 1962, he
bought the Harbour House from the Harbour commission for around 800 pounds. Happy
memories came flooding back; Daddy coming home from work and the two ducks meeting
him as he went to feed them and the hens; Playing with her siblings in the wild garden that
went back as far as Bachelors warehouse; The big fire in the sitting room after the tea on a
winter’s night; The day the soprano Mary O’Hara ( who had grown up in the Harbour House
in a previous time) pulled up outside in a chauffeur driven silver jaguar to have a look at her
former childhood home. Maria had no jaguar, no matter Maria couldn’t sing like Mary.
As she walked on past the old cattle yard, Maria could hear the lowing & mooing of the
cattle on a cold winter’s morning as though it was yesterday. They were checked there for
disease before being herded down Ballast Quay to the waiting boat for export to Liverpool
and further afield.
While stepping over the barely visible abandoned railway track, she was transported back to
her cosy childhood bed and all the nights she fell asleep listening to the shunting of the last
train slowing down to sleep for the night.
And there it was, in all its glory. The Deepwater! Starting at Lough Gill, flowing through Sligo
Town as the Garavogue river and on out through Ballast Quay to Deepwater Dock and onto
the Atlantic Ocean. What a source of fear it had been in her childhood. As children they
were forbidden to cross the railway tracks. It wasn’t called the Deepwater for nothing. Full
of rushing currents and underwater rocks as it made its way out to the sea. So lethal, that
Austie Gillen, a retired sea captain from Rosses Point, had to pilot all big ships in and out
through its channels. Oh so, so beautiful. Always present in her life from quiet calm days to
stormy rushing high tides.
Maria walked parallel to the Deepwater, marvelling at the Cartron housing development
across the water where once there had been open fields. In Homeland, there was a nice
café upstairs where she had a quick cup of coffee and looked out at an unobstructed view
across the water. This was the environment she grew up in—-spacious, uncluttered,
uncrowded and utterly peaceful. It was good to see it was still the same.
As she passed Bachelors and rounded the corner past the former Liebigs, Maria wondered
whatever Liebig’s did anyway. Also, how come a small town like Sligo had a multi – story
building like Bachelors long before such things were common? On she walked,
remembering the coal piles that she used to cycle around when she was a kid. All gone now!
She could still see the big ships docked in the 1960s unloading coal, timber and sometimes a
clatter of sailors.
As she passed what used to be Brooks Hanley she saw the red rental car waiting.
He opened the door and asked kindly “Are you ok Honey?” Maria nodded and got in. The
car door closed behind her with a click. “It will take us about three hours to get to the
airport”.
Maria started to cry, another year in a foreign overcrowded city with a people who weren’t
her own and not a body of water in sight.

What a horrible day at work, I think to myself, as I drive home rather slowly. Two new born babies we tested for Covid 19 await results. We helped two very frightened mothers put on personal protective equipment to see their beautiful babes in incubators. It’s just so unnatural. Restricted visiting meant no partners to

I walked, heading South West, on the little road that ran along the edge of Bunduff lake in North Sligo. It is one of those lanes with a spine of grass running down the middle. Locally, the road is called “The Frolic”. No one knows why it is called that. Perhaps a hark back to

I was born a townie at Pound/Connolly Street, Sligo, in a three storey street house with a cold tap inside and a flush toilet outside. When I was about ten my two sisters and I spent a week with my dad’s parents on their farm at Rossmore, Riverstown. It was Eastertime. We were sent out

I listen to the stove, rumble, growl A black bear caged in the chimney breast. My mind steps back I see Grandmother boiling water for the morning tea, The black kettle over the fire. I hear her imperious voice. ” Marty, we need water from the Well”. We walk down the fields to the bottom