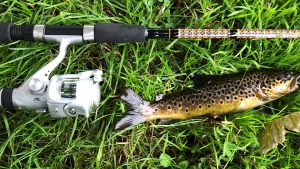 My childhood summers were spent running wild with brothers and cousins and neighbours in rural Mayo. Jim Conway took us fishing. He was a farmer, a small wiry man who played cards, cycled everywhere on a large black bike and smoked roll ups he made with tobacco stored in a small tin which he retrieved from the depths of his right pocket.

This fishing was not the demure sport of chance with a rod and line. We carried a very large net down to the Conway house under cover of darkness. There were five or six of us from Grandma’s, Helen and Michael Conway and a few more locals. We looked like the twelve disciples as we followed Jim and his lamp— if there was no moon— across the meadows laden with buckets and sticks and fizzing with excitement.

I remember the stillness of the fields in the darkness, the steamy breath of the cattle and the scurrying of mice or mink as we climbed over ditches; someone’s hand pulling me up out of the drain. The scent of honeysuckle all around.

Then suddenly we would land at the waterside. Jim had fished the Mullaghanoe since he was a boy, it had yielded salmon and trout when there was little else for him to eat. I was always fretting that we would be caught by the local water bailiff and locked up. Jim would laugh at us when we threw ourselves down under a hedge to hide when we heard a strange noise nearby: “Don’t be worrying yourselves one biteen, I know the whereabouts of that bailiff fellow he won’t be troubling us tonight.”

Jim supervised operations from the bank. Two of us would be directed where to stretch the net across the river. Each end of the net was wrapped around a thick four-foot broken branch which two of the lads held upright in the river, one on each side adjacent to the shore. Then the rest of us walked up the bank against the current of the river for about a hundred yards before easing ourselves into the water armed with sticks.

We squealed as the cold water gushed into our wellingtons. We then waded up the river swishing the sticks from side to side yawping and yelling so the trout would swim down into the waiting net. The river was never more than waist deep, but we had fierce craic when someone fell into a groyne or tripped on a big stone. Sometimes we were ‘skiting’ for hours before we caught a single fish. Sometimes we had a dozen or so silvery trout flapping furiously in the conical point of that enormous net.

Michael—Jim’s boy—would beat their heads against a stone. I had no stomach for the killing, but I feasted on them at breakfast. Nothing has ever tasted quite as delicious as those trout, coated in seasoned flour and fried in butter in the black skillet by Auntie May: crisp and golden, their pink flesh melting in my mouth. The salty juices soaked up with Grandma’s freshly baked soda bread.

Those nights in the river when we squelched home at dawn sopping wet and freezing cold, seem to yield us so much pleasure. Was it the unerring kindness of Jim or our intense camaraderie or the primitive hunting instinct or the nefarious excitement of possible detention by the law?

Decades later, reminiscing at Jim’s funeral, I realized how groundless my fears were when a neighbour told me: “It was Jim Conway himself; sher did you not know; ‘twas himself was the water bailiff.”

On a sunny day last year my husband, Jim, and I decided to go sailing. My sister Kath and her husband Tony joined us as they were visiting us at the time. Our sailing boat is a 30ft sloop and named Rockabill and is easy to manage. All four of us are pensioners and enjoy

The quay was more deserted then usual on my early morning dog walk. The chimneys empty of smoke, roads car free. The stunning view of the flood refilling the river, mists rolling back towards the ocean. A heron squawked and flew off when I got too close. It reminded me of a story I heard

Ballymore Lough is a freshwater lough in the parish of Attymass Co. Mayo; the parish is nestled by the Ox Mountains to the east and the River Moy to the west with Nephin in the background, surrounded by rugged scenery and steeped in local folklore and myths. The lough is overlooked by Old Killeen graveyard

Our minds weren’t on the foot cocking, that sultry July afternoon; the air as still as the breaking dawn. Tomas remarked “it will be a perfect evening for Dereken; the perch will be in shoals there”. I was so enthused by this optimism, I began to gather speed with my wooden rake. Worms were already