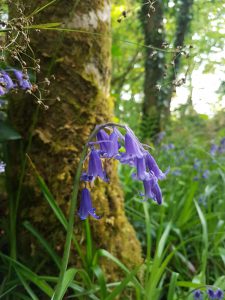 The tiny stream beside our house was a favourite place to play. The bridge was a source of politics for our neighbours who claimed that either side of the small bridge was of equal importance. The question; “Are you on the Knoxtown side or the Killegney side?” became a well know statement and point of mocking among locals. We straddled the two, standing with one foot on the bridge and the other on a young ash tree. We would hide under the old bridge, scuffing knees on the damp stones, slick with mud, when the stream dried up in the summer and the pheasants called. Catching a friend when they fell into the cold and dark waters one winter. Shivering and soggy as he went under and was pulled out as quick. Hideouts and cry corners, secrets told and adventures unfolded by that old bridge, where primroses grew in abundance, their sweet scent awakening the spring. That tiny stream gurgled and meandered its way through Clonroche and Killegney. Surging quickly and making its way to the river Boro.
Between Killengney, Clonroche and Rathnure flows the river Boro. It rises at the foot of the majestic Blackstairs Mountains and emerges into the well-known Slaney.
The stone bridge in Killegney beside our small, two room primary school, was quintessentially picturesque. A postcard of the Irish countryside.
Cows grazing in the fields nearby, bluebells and pussy willows growing wildly. Dainty sap green fronds of Sally willows dipping elegantly into the river. Quenching their thirst. A recalling of my sister falling unceremoniously into a bed of nettles, soft and stinging.
The wailing and the reminding for years to come.
Just beyond this, a hidden walkway through woods, by the bridge behind an ancient rusty gate. We would follow the river along the way, cresting the hilly banks and collecting armfuls of bluebells, while blackbirds thrilled above.
Upstream from Castleboro we used to fish for brown trout and sea trout with our father. I never remember catching any, but the nostalgia of walking through the forest to arrive at the fishing spot is still clear today. Scurrying under canopies of oak, pine and birch trees, crunching of leaves underfoot, snapping of twigs. The babbling of the brook and the excitement rising. Watching and helping, but probably more hindering. Not having the patience to fish, instead following the dragonflies with their gossamer wings and the dancing midges. Transfixed at the boatmen skimming the water. Baffled at how they barely broke the surface. Light dappling through young beech trees, auburn and copper leaves falling silently on the inky black surface of the river Boro, in autumn. The vivid memory of seeing a Kingfisher, the first and only time, a brief snap of turquoise and amber. Then disappearing in a flash, but the brash colours lingering in the mind forever. By Rathnure, through the woods where cowslips and wild garlic grow beside mossy stones. A wonderful recollection of catching tadpoles in jars by an old fallen tree, with our mother. The glistening stream shallow and lined with water cress. Bright yellow flag irises emerging by the banks. Bees humming and painted lady butterflies chasing through the air.
Feeling the fern fronds, soft and tickly, as they unfurled. The see-through waters running quick and clear. Stones and pebbles visible beneath as frogspawn bobbed on the surface. Millions of tiny eyeballs staring up.
The squeals as we touched the wobbly jelly with furtive fingers.
Hopping home with jars and hearts full.

After an enjoyable evening fishing on the river Slaney, four anglers met in Deanes Bar, Bunclody. Whilst enjoying a few pints of the black stuff, the conversation turned to what had happened during the day’s fishing on the river. As they continued to enjoy their pints, each of the men claimed to have a great

We are on the Marina, my granddaughter and me. I hold her in my arms. She points and grunts. “Yes”, I say, “these are the great trawlers all tucked up in bed together now but soon they will be carefully making their way out of Wexford Harbour. They will bring back mussels for us”. She

On arising each morning these days those are the ifrst words to be uttered by me without fail, whether statement, quesiton, prayer or mantra ifts my mental bill I’m not too sure but that’s how it is for me. As a senior ciitzen living alone cocooning in lockdown no one hears if I talk to

The sun like a warning, blood red begins to slowly set. Two young children run along the itde’s edge collecitng shells. They giggle and scamper along the shoreline, chasing the oystercatchers as they run. Their bare feet leaving small imprints in the wet sand, for a brief moment, before disappearing. Waves folding and peeling across